What Your iPhone Doesn’t Tell Apple 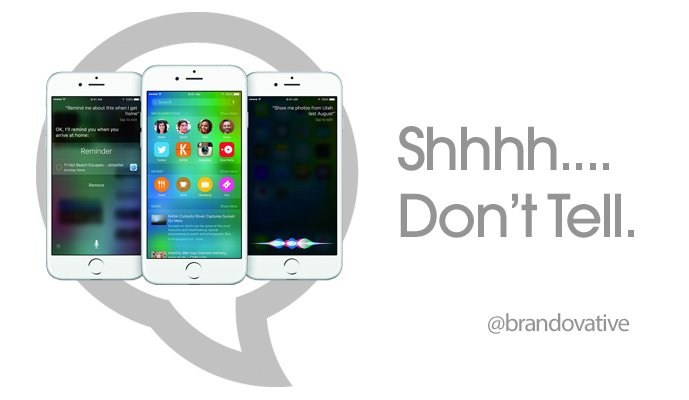 The new iOS 9 operating system for iPhones and iPads could ease privacy concerns, but is it smart enough to compete with Google?

Every tech company says it can make our gadgets smarter. Now Apple says it can do that with less snooping.

Is it really possible to have both?

Starting Wednesday, iPhones and iPads will gain the intelligence to proactively suggest whom you want to call and what you want to read. They’ll nudge you to hit the road early for your next appointment when there’s a lot of traffic and queue up your favorite podcast for the drive. This personalization is a big new feature in iOS 9, a free update available to every Apple device as far back as the iPhone 4S.

That’s the sort of intimate insight you expect from a spouse, a spy or, nowadays, an Internet company. But iOS 9 manages these tricks in a privacy-conscious manner, without hoovering up your email, photos or contacts into Apple’s vast cloud servers for mining and manipulation. Unlike rival Google, Apple says it figures most of it out on the phone itself, far away from the prying eyes of advertisers or potential hackers.

Apple, CEO Tim Cook says, “doesn’t want your data.” I love that he’s calling out the hidden trade-off to many seemingly free online services like Google and Facebook . With iOS 9, iPhones are encrypted by default and, at last, permit us to use Web ad blockers.

But test-driving iOS 9 also made me worry. Apple’s new intelligence features work well enough but are ho-hum compared with what the data jockeys are cooking up at Google, Facebook and Microsoft. In a world where more of what’s possible with technology happens by analyzing huge troves of information online, Apple’s privacy-first approach still has to prove it can keep up with the technology that makes our gadgets useful.

Apple doesn’t make most of its money through marketing, so it hasn’t needed to gather KGB-worthy dossiers on customers for better ad targeting. But make no mistake, Apple still relies on the Internet. It sells music and movies online, runs an app advertising network, touts services, such as the Siri voice assistant, and wants us to store files in its iCloud. (That service is how Apple got in trouble in 2014 when hackers stole passwords to the photo libraries of celebrities.)

What’s unusual is that the data that serves as the cornerstone of iOS 9’s newfound intelligence doesn’t have to leave the phone. The iPhone’s own computer combs through your email, contacts and calendar, as well as how you use apps, like an overeager secretary.

If you get an email with restaurant or flight reservations, the iPhone notices and creates a calendar entry. Unknown number calling? The iPhone checks your correspondence to see if you’ve got a matching name and number buried in email. Always check Twitter first when you wake up? The iPhone presents it as a suggested app on that new menu when you grab your phone.

In cases where Apple has to connect to the Internet to get useful information, it often takes measures to render you anonymous. For example, the iPhone can alert you to leave early for a calendar appointment if it notices traffic on the drive there. But when it checks in with Apple’s servers, it reports you as a random ID—a string of numbers it flushes as often as every 15 minutes.

A new, built-in News app tries to serve up stories you’ll find interesting, based on what you read. But instead of associating that information with your Apple ID, it uses another random identifier that you can clear. (Apple still allows advertisers to target interests based on your identifier, though you can opt out.)

Siri has the same amnesia—everything you ask and everything she learns about you is associated with, you guessed it, another random ID that gets wiped when you buy a new phone or reset your existing one.

Google, by contrast, seeks your name, phone number, gender, contacts, emails, calendar, searches, location—everything but the contents of your briefcase—when you sign in and use its services. Most of that information is tied to your account. Google says it doesn’t sell personal information, but it can use it to target ads. (It’s onerous, but you can sign out of apps that don’t require an account, including Maps, and hide some Chrome browser data from Google.)

And with all that data, Google can provide services that leave Apple’s in the dust.

Take Google’s new Photos app. Like Apple’s Photos, it can store a lifetime of shots in the cloud. But Google actually looks through your shots, automatically spotting faces and even identifying what’s pictured, making photos searchable. Type “food” and see every ramen bowl you’ve ever snapped. Apple’s privacy-centric Photos encrypts your shots and doesn’t look at them, and it can’t do that kind of auto-analysis on the phone itself. (It can only identify faces when you manage pictures on a more-powerful Mac.)

Every major tech company seems hellbent on building smart devices that know what you want before you do. Google Now beats the pants off Siri at presenting information you might find useful without your even asking, like news alerts, updates to sites you visit a lot or scores from your favorite teams.

On Sunday afternoon, my iPhone suggested that I might want recommendations for lunch in San Francisco. When I tapped a button, it proposed something called “Michael the Coconut Guy” and a random corner deli. Google Now, at that same moment, proactively recommended restaurants I would have suggested myself: a beloved bakery called Tartine and the restaurant Zuni Café.

Google’s higher IQ is extremely helpful in places like the car, where Android Auto can automatically pop up the address of your next appointment, or a business you just searched on your laptop. (Siri does a solid job riding shotgun with Apple’s CarPlay, but that point-of-interest problem is even more glaring on the road.)

It isn’t just Google. Microsoft’s Cortana, built into Windows 10, provides a “notebook” of what it knows about you across devices, which you can add to or edit. But there’s no way to see or edit what Apple’s Siri knows about you. She’s designed to not know it’s really you.

READ MORE AT… Wall Street Journal – By Geoffrey A. Fowler